Horizontal smokers with a side firebox and tuning plates.
Post Reply
105 posts

This is just mocked up. Not welding it until I figure out baffles, doors and smoke stack. I figure all that will be easier before it gets welded on.

It's going to be a neat looking cooker when you get it finished.

Thanks Big T. We’ll see. I think it’s going to work out well but there are a lot of moving pieces. Trying to take it slow and think everything through.

Thank you towtruck.
Any ideas on the size of baffles between the FB and the WC? CC and WC?
I don’t see any mention of them in the pit calcs.

I put a 5'' X 5'' square opening on my FB/WC and it's probably overkill. I believe that Frank used 4'' pipe on Mack from the looks of it. I made the CC/WC the same as my throat and it's too large. I've never had to open it more that half way so I think 50% of the throat is plenty.

My thought was that either one of them wouldn’t need to be any larger than the size of the smoke stack opening. I’m imagining the WC to be an extension of the stack. Especially if I build it as a reverse flow/standard hybrid. Am I oversimplifying?

That is correct, the WC doesn't require a stack, just a hole in the top will work. I have a 4'' stack on top of my WC, just enough for a damper and handle and it works fine.

Did some mental gymnastics on the build today. I needed to figure out where exactly to mount the WC on the FB and where to cut the openings for the fb/wc and cc/wc baffles. First, I had to figure out where top center on the smoker was. I used a straight edge laid flat overlapping the joint where the FB and CC came together and adjusted the smoker until it sat level. Then I used a level on the hole punch on the center mark I used to cut the round flat cap I put on the end of the CC going vertical to mark the center on the end and then the FB. The hinges on the CC door end up being just left of center.

Took more trial and error than I would have liked.

After I cut the holes, I used some flat stock to give me a flat surface on the FB for a half circle baffle to turn on. I will use a small section of 5” OD pipe to connect the cc/wc opening with the baffle on the CC side. I’ll trace the circle onto the WC from the inside of the opening in the CC.

I also cut out and patched 2 bungs on the top of the FB I had thought to use for openings.

Doesn’t look like much work but this took me 4 hours. 3.5 hours of bad math and do-overs and 30 mins of cutting/welding/grinding. Big mental hurdle now behind me.

I’ll have to get all the paint off the top of the FB before I mount the WC.

The plan is still to make this primarily a standard offset with the smoke collector and stack mounted opposite the FB. I am going to include tuning plates that will allow for tuning but also to act as a BP along the bottom to set this up as an RF using the WC as a stack. 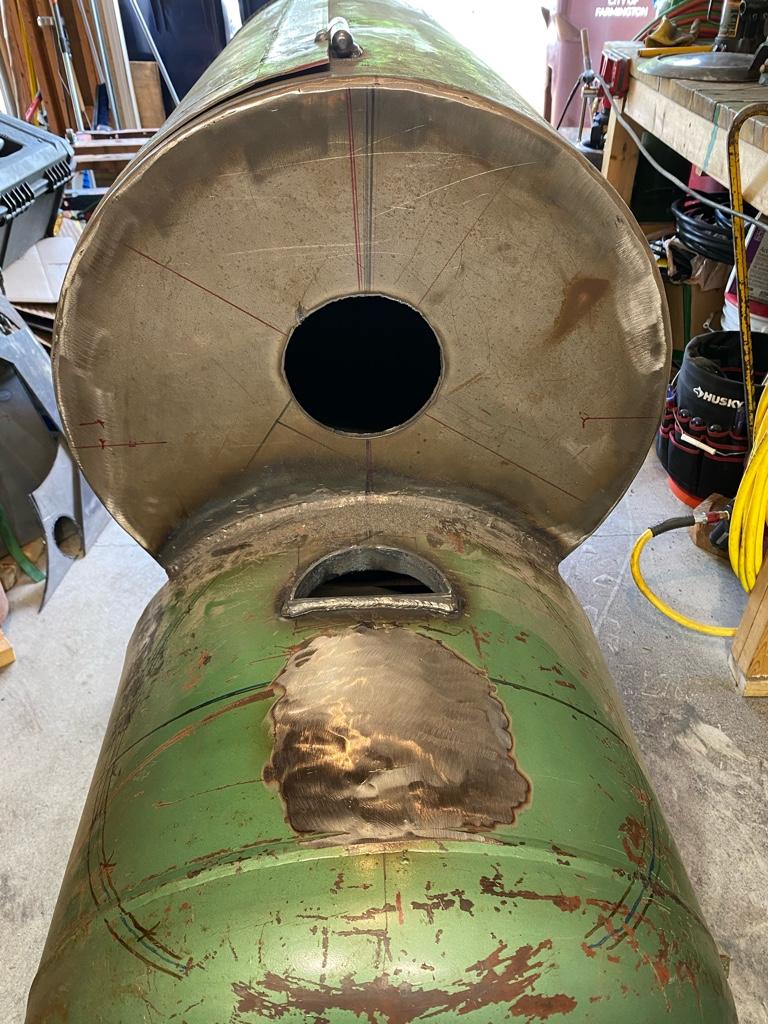 Sent from my iPhone using Tapatalk

This is a great build mate. I’m enjoying watching it.

Thanks Andy. Hope it turns out well.

Thinking about taking it out and sanding all the paint off before I assemble it any further. It’ll be tough to get the paint off once the warming chamber, etc are attached.

Thinking about taking it out and sanding all the paint off before I assemble it any further. It’ll be tough to get the paint off once the warming chamber, etc are attached.

Absolutely! And burning it off isn’t satisfactory IMO.

Stripped her naked today. Lots of grinding. Used a paint stripping wheel for most of it. Ran out and switched to a wire wheel. Still picking wires out of my pants. Hands are going to be sore tomorrow! 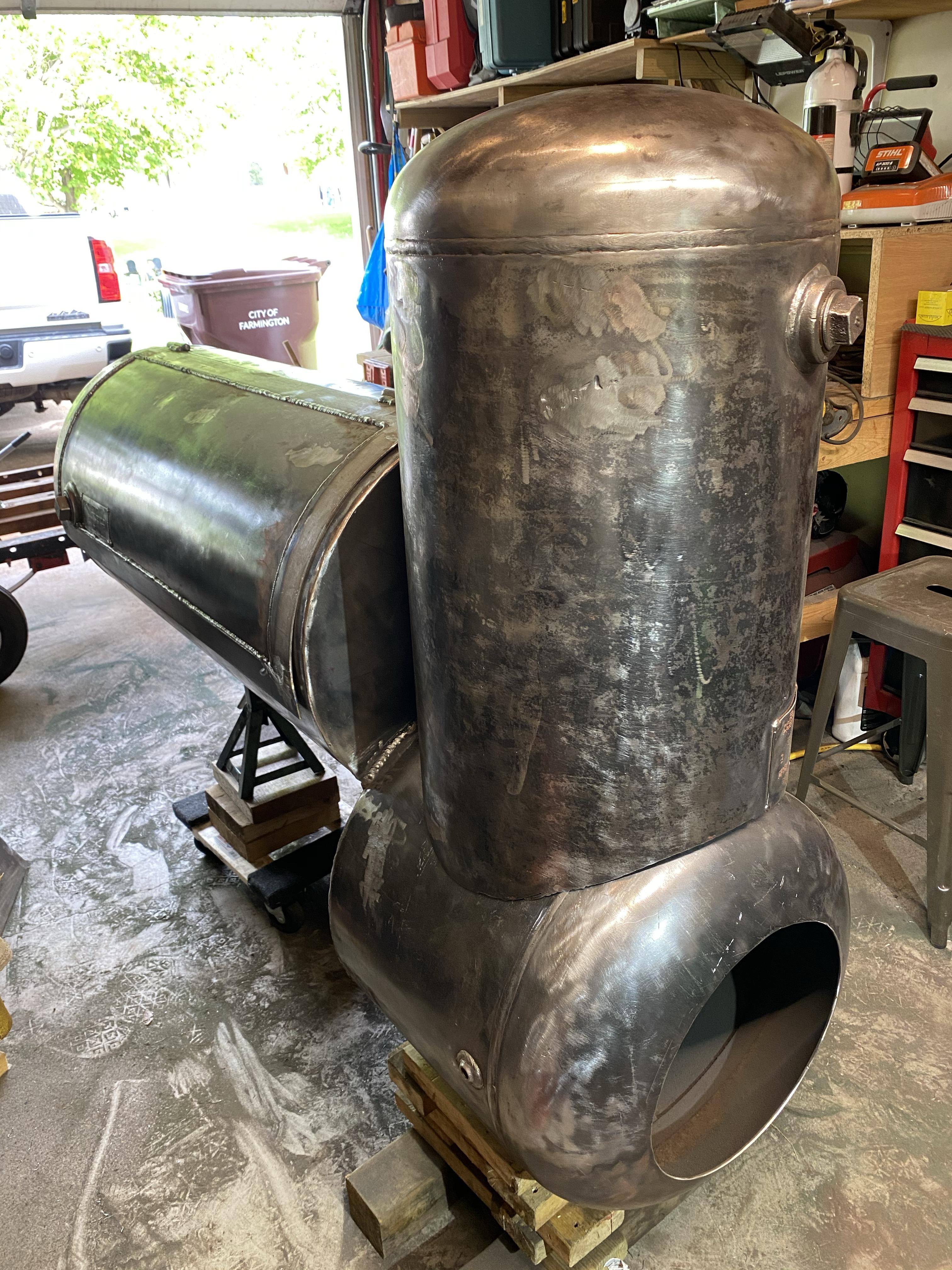 Sent from my iPhone using Tapatalk

It looks cool with it being bare metal.

There’s still a bit of the pink primer on the tank in spots. You think that will burn off?

Also, what’s your thought on grinding out the rust on the inside of the CC before I burn it? Any benefit of grinding it before or after?

hogaboomer
Just Got in trouble for buying tools

Grind the rust inside?, do people do that? It's just gonna turn all black and greasy after you cook on it a few times.

My CC is a compressor tank. It must have had water sitting in it. The rust is pretty thick and flaky in spots. It needs some wire wheel attention at least.

I normally hit them with a wire wheel before I burn them if they're pretty rusty and most of my builds are used material. It's possible that the primer will burn off if it isn't some of the super primer like they use on drums.

Bad news tonight. A big section on the warming chamber is rusted through. I hit it with a wire wheel this evening and started seeing light holes peeking through. I’m thinking about cutting it out and making a square door like on a tank build.

dacolson wrote: ↑
May 28th, 2020, 8:39 pm
Bad news tonight. A big section on the warming chamber is rusted through. I hit it with a wire wheel this evening and started seeing light holes peeking through. I’m thinking about cutting it out and making a square door like on a tank build.

That should be an easy fix...

I was just wrapping up for the night. One last look into the tank as I was wrapping up grinder cords. Are those little lights peaking through there??? Son of a ...

That's one of the reasons that I try to wire wheel the thick rust but at least you found it early in the build.

Lesson learned this time: hit the heavy rust w a wire wheel before you spend 2 hours sanding the paint off the outside.

Imagine how angry you’d be if you found it at the end of the build.