For my first ever build, I was going to do a reverse flow smoker out of an old water heater that I pulled off of the house and saved.
After getting the legs on the thing and dropping a tape off of the end of it, I realized how long and (in my opinion goofy looking the thing was going to actually be (over 6').Too much real estate. Center feed seemed a better way to go. I have been having a ball putting this thing together, and cant wait to fire it up and see how it does. still needs some work but I am off and running. Fabricated every part on the thing so far from scratch including rolling up the wheels from flat sheet metal plate, and turning the heat handles with a jig that I built to get that twisted swirley look. no store bought stuff planned. 1/4" plate on the FB. fabricating a SP and BP from 1/4" also. 30 gallon tank 14" round by about 48" long..
Have some #9 flattened laying around that I'll use for the grate and FB coal basket.
I'll try to post a few more picks as the thing progresses..
Regards,
Tinspark
You do not have the required permissions to view the files attached to this post.
Last edited by tinspark on July 19th, 2020, 11:21 pm, edited 2 times in total.

3.jpg
2.jpg
1.jpg
You do not have the required permissions to view the files attached to this post.

If it's tourist season, how come I can't shoot 'em?

Here's mine
It's a 28 gallon water heater and an air compressor tank that I narrowed down to size. It's an awesome cooker. The only thing I'd have done differently is I'd have moved the firebox up a little (made them closer) a couple of inches. 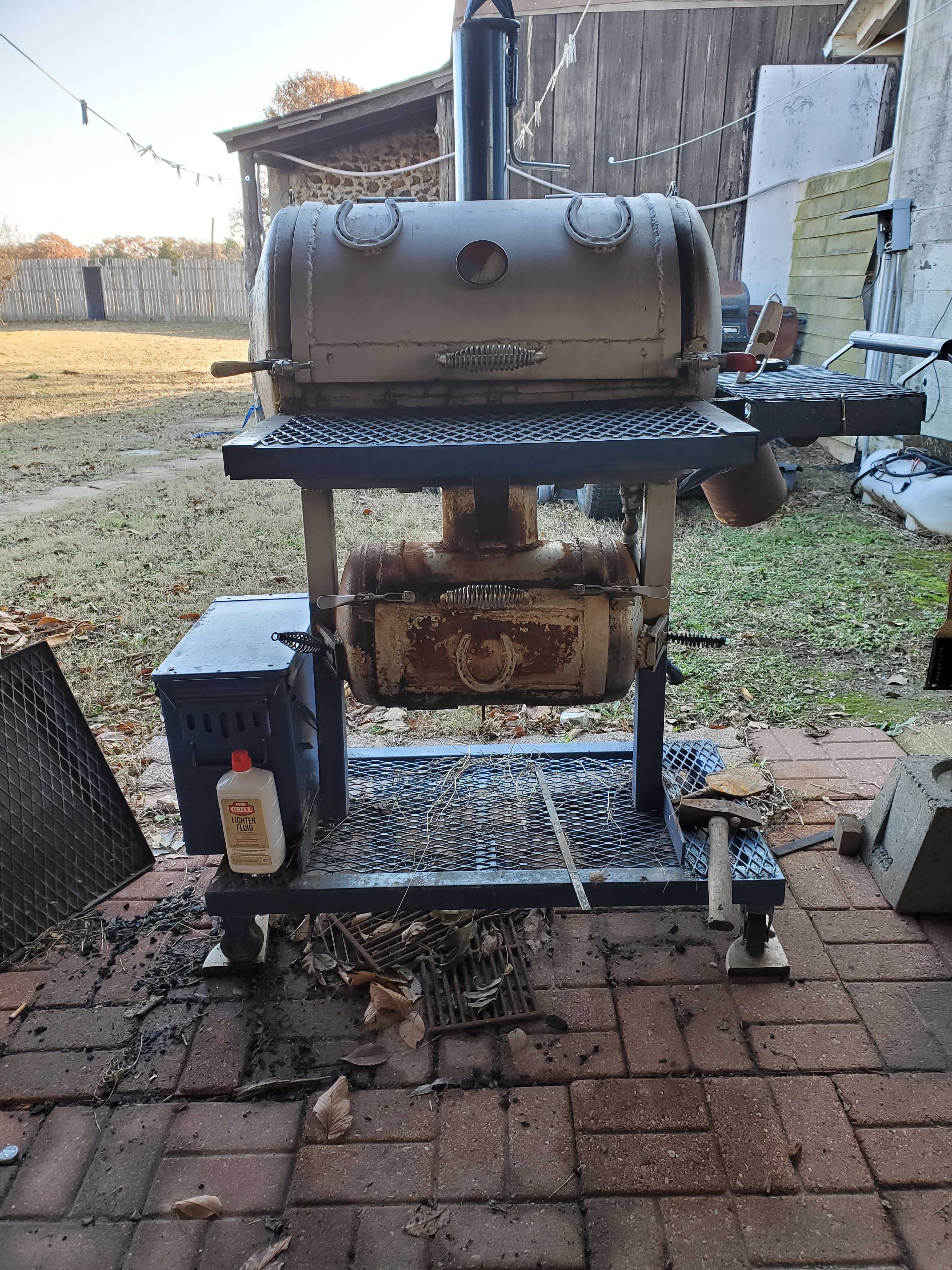 McBroom wrote: ↑
March 18th, 2020, 2:46 pm
The only thing I'd have done differently is I'd have moved the firebox up a little (made them closer) a couple of inches.

Man thats cool looking!!
why would you have moved the FB up?
Thanks!

I added a damper this evening.
An experienced member was saying yesterday that he was getting as hot as 500 deg. Fahrenheit on his CF smoker.
https://smokerbuilder.com/forums/viewto ... 77#p111477
That's blazing!! He added a damper and was able to choke things down and manage the heat better. I appreciated the share, and followed the advice!!
You guys are awesome
Regards,
Tinspark
You do not have the required permissions to view the files attached to this post.
Last edited by tinspark on July 19th, 2020, 11:22 pm, edited 1 time in total.

McBroom wrote: ↑
March 18th, 2020, 2:46 pm
The only thing I'd have done differently is I'd have moved the firebox up a little (made them closer) a couple of inches.

Man thats cool looking!!
why would you have moved the FB up?
Thanks!

A little less heat loss. I cooks beautifully. I do love it!
Being 2" higher would help with the heat retention which would also help the stall temps...

I appreciate the reply Claud. I am not too familiar with the term "Stall Temps". I am guessing that means that it gets too cool and is out of the desired heat range ?
Regards,
Last edited by tinspark on July 19th, 2020, 11:24 pm, edited 1 time in total.

I think it's a smart move adding a damper, it can help you regulate your temps if your fire gets too big. One thing to remember is to be sure that it isn't too tight right now because metal tends to move in mysterious ways when it gets hot and it could bind up if you don't leave a little wiggle room.

baffle plate.jpg
baffle plate.jpg
A little more progress today. And here are a few more pictures..
I have 80% free area at the ends of my BP (40% of throat opening per end). also I went 12" long on the SP. Both 1/4" plate.
Still very close to the reverse flow smoker specs for this build.
shadow and baffle.jpg
You do not have the required permissions to view the files attached to this post.

Coming together a bit more this evening..
You do not have the required permissions to view the files attached to this post.

It looks great! I still believe that your original design with a single stack and no divider will work. I'm not sure if the pictures are still on the forum because we had a problem after an update and lost a ton of pictures but I know of a few guys that built this same style and they loved them. I'll try to see if I can find them and post a link.

Baffle plate completed built shelf. Heated and bent 5/8" rod shelf frame added #9 flattened expanded. Also #9 flattened on cook grate. Will be flush with CC opening after welding in tabs tomorrow. Will have 1.75" SP to BP. and 3" from BP to cook grate. I was pretty happy with the way my FB spring latch turned out. used a 1/4"x 1-1/2" roll pin as the catch. Was vacillating between adding two or one stack based on some of the recommendations from seasoned members here on the forum. Decided to try the single as originally planned, and if I have flow issues, will deal with that later. Multiple options in this regard..Appreciate all of the comments and feed back. Will be building a coal basket tomorrow and hopefully adding my stack. I have several pipe sizes in my metal boneyard to choose from, but will go with the size that throws the smoke over my head. After my stack is completed, will burn a few baskets and take some readings with my heat gun and also watch my gauges.. hopefully it'll b billowing light blue smoke soon. I have a buddy that is willing to break the COVID 19 stay home strategy and help me christen this thing correctly. Of course with the 6 foot away from the other dude, stand-off..I think this monstrosity weighs in at about 450 lbs dry!..
You do not have the required permissions to view the files attached to this post.
Last edited by tinspark on March 29th, 2020, 3:47 am, edited 1 time in total.

Looking good! I hope it works as planned....less work is always better!

Definitely an interesting smoker. I’m interested to see how well it is able to recover after the lid is opened. Looking forward to your test cook.

Dirtytires wrote: ↑
March 25th, 2020, 11:04 am
Definitely an interesting smoker. I’m interested to see how well it is able to recover after the lid is opened. Looking forward to your test cook.

If your lookin' you ain't cookin'

4.jpg
1.jpg
2.jpg
3.jpg
Test burn tomorrow after I get the lawn mowed. cant find the dogs out there today!
Used the old flue pipe that ran up the middle of the water heater as a stack 3" OD round 14 ga x 20" long
You do not have the required permissions to view the files attached to this post.
Last edited by tinspark on March 29th, 2020, 3:50 am, edited 1 time in total.

Just a thought....forget mowing, get bigger dogs and just fire up the smoker!

Took your advice, fired up the smoker.
The dogs are already bull mastiff's so I really can't go that much bigger. I can see their tails sticking up in the brush.
Fire management is going to be key on this thing for sure. I put about 1/4 basket full of briquettes. Then added one fist sized split of almond (very plentiful around here) and cant keep it below about 350 degrees without choking it down at the throat damper that I installed as well as closing the FB and air inlet . I'm pretty sure that I choked it down too much and the temp drops a bit. White smoke starting coming out after about 30 seconds (see pic). I was listening to one of those podcasts and the person mentioned that if the firebox is starved for air or the coal basket isn't gettinough air around it, then you'll see white smoke (doesn't taste good- bitter) I opened it up and the white smoke almost immediately went away to almost no smoke. But my temps were up to about 350
So...……. looks like I'll be experimenting with a much smaller fire.
Once dialed in on the fire management, I think temps will be good!!

But on another note I don't know how this thing'll flow without loading it with a rack of ribs or something. Since it is a CF smoker, and both ends are open and the smoke will take the path of least resistance. That'll be my next experiment after I learn a little more about fire management on this thing! May need to remove the single stack and add double stacks later and maybe even a removable center divider. On that note, You guys know of an easy way to measure flow in the cook chamber? I've been kicking it around for a few days. I guess with double stacks I could see if there is an even amount of smoke coming out of each stack after it was loaded heavier on one end.. Is there a test with a single stack? Some dude from the Ukraine built one with a front glass, kinda liker a fireplace insert glass, I guess a couple of ports and a light might work but maybe that's a bit too much overthinking things,,..
1.jpg
[attachment=2]2.jpg
You do not have the required permissions to view the files attached to this post.
Last edited by tinspark on March 29th, 2020, 3:59 am, edited 2 times in total.

Dirtytires wrote: ↑
March 25th, 2020, 11:04 am
Definitely an interesting smoker. I’m interested to see how well it is able to recover after the lid is opened. Looking forward to your test cook.

Good question. I was even considering a lid prop to keep heat in while I fuss with stuff, but it doesn't seem to be an issue. My issue will be too much heat in this thing.. The temperature drops about 50 degrees with lid open for about 30 seconds, but recovers in about a minute. I think the 1/4" thick Baffle plate below seems to be a great heat sink.. I can see that my issue, if I am not careful is too much heat, and burning down my shop while I light the basket up!! that self igniting stuff really goes up in flames! see attached pic. At least I had sense enough to light it on my welding table. maybe Id better just light it in the firebox next time. I don't have one of those cool charcoal chimneys yet so I thought I'd try this... FAIL!. I didn't add any fuel. The wife picked up a bag that said "no fuel required". No false advertisement there.. lol!!
Last edited by tinspark on April 2nd, 2020, 3:17 am, edited 3 times in total.

A temp gauge on each side would tell you what is going on. I'd put them mid way over each half. You could do it with meat probes if you have them.

Stack some bricks up on one side and see what your temps do....as far as staying even.