We love to cook and we love to hear what others are cooking. With pics of course!
Post Reply
5 posts • Page 1 of 1

im doing a whole pig mid august and need some advice as ive never done one. pigs gonna be about 80lbs and done in a reverse flow smoker I built. any advice would help like temps ,time, how to dress the pig. ive been looking around but seeing a lot of conflicting info. thanks

They cooked a 75lber on The Hawg Cawffin at the gathering. It isn't a RF but it does have a baffle between the coals and the racks. Frank separated the ribs and flipped the over the inner chest so the wouldn't over cook. He was injected with a mixture of rub and I believe some type of fruit juice, I think they used pork mafia seasoning. Then it was coated with rub inside and out and laid skin side down on foil. They cooked it at 250-300 degrees for about 8.5 hours. Frank mopped the insides down about every hour or so until it got a good color and then it was wrapped in foil until it reached the temp that he was looking for in the hams and shoulders. I believe there's some pics in the 2017 spring gathering thread. It turned out pretty good, didn't have the picture perfect look with the apple in his mouth but the flavor was on point!

I didn't do anything to it except smoke it. The mistake I made was only bringing it up to 160° so it didn't pull like I wanted it to which would take a temp around 195°. Everyone that had it thought it was great though... 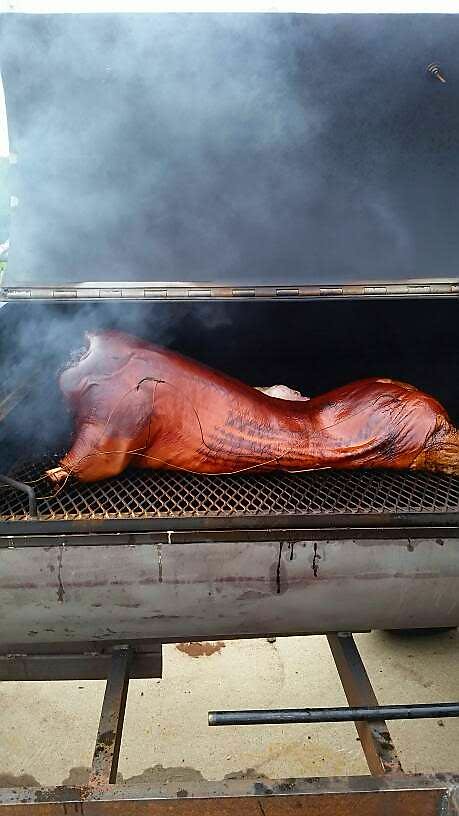 I cook a lot of them. I lay them on their back run a hatchet up the spine so it lays flat don't cut all the way thru. Pull the spinal chord out. Trim the skin back on the hams and shoulders. Rub the skin with olive oil and salt. Coat the meat and inside with mustard and coat with your favorite rub. I inject the loins hams and shoulders with Goya mojo criollo. I cook around 250-300 spraying the pig with apple juice and cider vinegar. I push my ham temps to 190. Then it should be ready to pull apart as needed. I do 12-18 pigs a summer this way and have always been satisfied with the results.

Cooking on the back the ribs and cavity act as a bowl. It protects the inner loins from over cooking and gives you great mop juices.